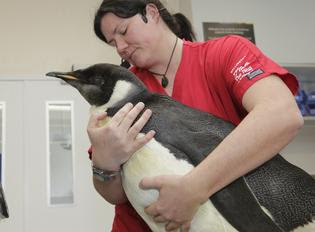 Richard Sadleir, a former director of science and research for the NZ Conservation Department, has some interesting ideas on why the Emperor Penguin now known as 'Happy Feet' decided to up stumps and visit the land of the long white cloud. Here he writes for the Dominion Post about his theory:

"Why should an emperor penguin travel from distant Antarctica to finish up on a New Zealand beach? The distribution and movements of animals is a fascinating part of ecology. Most populations live in well defined ranges but, surprisingly, often individuals wander long distances from their normal home.

It is very likely that many emperors made it to New Zealand in the past 1000 years and many more would have travelled north and probably died before they could return home.

Why should this happen ? Ecologists think that the evolutionary reason for roaming animals, often called stragglers, is that, by chance they may arrive at a suitable place to live, then settle down and start a new colony, therefore extending the range.

A pregnant female mammal, or a female bird with an egg forming inside her, could theoretically start a new population, but in most cases more than one straggler would be necessary.

Almost all of these roaming individuals die but the process of such attempted dispersal continues as it has for thousands of years.

About 50 years ago a keen naturalist in New Plymouth kept a light trap running for many years. Insects attracted to the light are collected in a container.

The naturalist found hundreds of butterflies and moths that had blown over the Tasman Sea from Australia, especially after big storms. Almost all of these never established themselves here, probably because of our colder temperatures.

Again and again, special animals try the long trips to find new areas to live. Almost all die but some are successful.

In 1912, a small Australian wallaby was freed east of Rotorua. This species has very slowly increased its range eastward, getting halfway to Whakatane. But year after year, locals have reported seeing wallabies many kilometres away from the main range. These stragglers may find new habitats or they may not.

Three wallabies that turned up in Taranaki were certainly helped in their dispersal by a passing hunter!

The Indian mynah bird shows the same process. Introduced to the North Island in 1875, this bird, considered by many to be a pest, spread widely and now lives almost entirely north of a line from Whanganui to Waipukurau. It is apparently too cold for this species further south, yet there are sightings of stragglers trying to probe southward.

Strangely, the species was found in Wellington many years ago but it then vanished. Perhaps, as our climate warms, this unpleasant bird may make it south.

So Happy Feet is a sort of pioneer, looking for a new place to live. The penguin seems to have travelled too far in its quest but its relatives back in Antarctica will continue the process of travelling far from home to see if new homes are available.
Posted by RR at 02:32