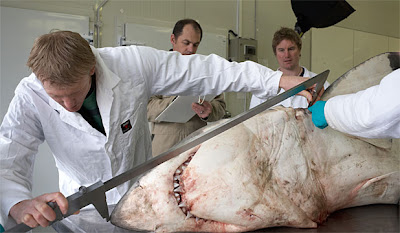 A 2.8-metre great white shark hauled out of the entrance to Wellington Harbour had been feeding on large marine mammals.

One of the biggest surprises, for the examiners, was discovering that the shark had an empty stomach except for a seal claw and some tape worms.

The claw was the "smoking gun" that it had started eating seals, he said. "This shark had moved from being a fish eater to being an apex predator ... These are animals that sit right at the top of the food pyramid."

Scientists would study markings to establish if the shark had been spotted off Stewart Island, where Conservation Department shark expert Clinton Duffy had collected photographic records of great whites.

Cells of the shark would be analysed to try to discover what else it had been eating.

The shark was hauled from the water near Barrett Reef in October last year by Peter Amitrano and Alfonso Basile, who had set moki nets.

Great whites are a protected species, meaning if they are caught, the Conservation Department has to be notified.
Posted by RR at 01:35