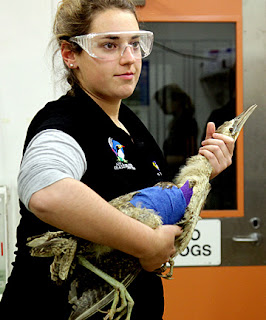 A rare endangered native New Zealand wetlands bird has been brought back from the brink of death at Massey University's Wildlife Centre after arriving with a severely damaged wing.

Boris the New Zealand Matuku was picked up by Bird Rescue Whanganui and taken to the centre because of a fractured right wing which had led to it twisting around.

He was due for surgery on Tuesday but suffered a cardiac arrest after being anaesthetised and was resuscitated by veterinarians who decided to postpone the wing surgery.

Boris' wing fracture had healed out of alignment, so it would have to be rebroken and the muscles around it stretched out because they had contracted with the new position of the wing.

Matuku are endangered in both New Zealand and Australia.

There are about 750 left in New Zealand and less than 1000 in Australia.

There was great concern for the falling numbers of Makutu but it was difficult to learn about them because they were so good at existing unnoticed.

Massey University zoology lecturer Phil Battley said the main way the birds were monitored was by their loud booming calls. "They are a hard bird to get a handle on because they live in swamps."
Posted by RR at 02:33