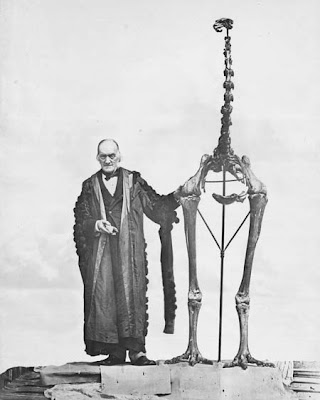 Strange stories of strange birds and even stranger fossils were coming from the end of the world during the 19th century.

The first Europeans spotted New Zealand in 1769 and Captain Cook explored the Northern Island four years later. Cook was very interested in natural history and collected tales about the fauna and flora from the locals.

On the Northern Island nothing unusual was reported, however on the Southern Island legends involving a monstrous bird existed. These legends explain an unusual hunting method for a large bird. Hunters would use incandescent rocks, which swallowed by the bird would then burn it from inside. The preferred habitat of these birds was said to be the swamps and forests and according to some legends until 1800 they were very rare animals, but still living on the island.

In the year 1823 a hunter named Meurat claimed to have found a bone with flesh attached to it. He assumed by the apparent good preservation that the remains were very recent.

Joel Polack, a trader who lived along the eastern coast of the Northern Island, records that during a forced stop of his ship in the Tolaga Bay in 1838 he had been shown “several large fossil ossifications” found near Mount Hikurangi by the Maori in the winter of 1834. He was certain that these were the bones of a species of emu or ostrich, adding in his report that “the Natives add that in times long past they received the traditions that very large birds had existed, but the scarcity of animal food, as well as the easy method of entrapping them, has caused their extermination“. Polack further noted that he had received reports from Maori that a “species of Struthio” still existed in remote parts of the Southern Island.

The German naturalist and geologist Ernst Dieffenbach also refers to a fossil from the area near Mt. Hikurangi and reports that it belongs to “a bird, now extinct, called Moa* (or Movie**) by the natives”. He continues “On questioning the natives, as I usually did, relative to the natural history of their country, I heard a curious tradition connected with the totara-tree in the neighbourhood. Near this tree they said their forefathers killed the last moa. From the few remains of the moa that have been found it has been declared by Mr. Richard Owen to be a struthious bird of large size."

Read the whole fascinating piece by David Bressan over at his Scientific American blog. You'll be surprised where this story ends up! 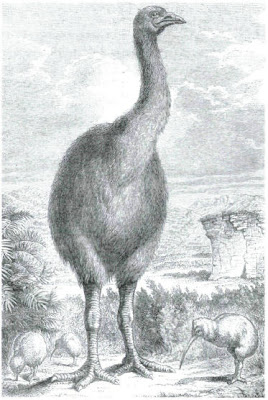