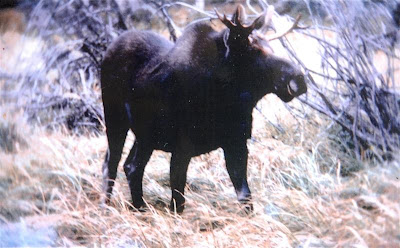 Four photographs of three moose that a Northland man claimed last year were taken in Fiordland in 1953 were actually taken in Canada.

In June last year, the late Fred Stewardson, of Hikurangi, recounted to the Otago Daily Times and other media how he and a companion came across the animals on a hunting trip to Wet Jacket Arm.

However, Fiordland moose researcher Ken Tustin, of Bull Creek near Milton, said yesterday after two years of work he had established the photographs were taken near Banff in 1958.

"The old fellow was absolutely entranced by the moose story, knew or found out, through me, a bit about it, and then wrote himself into it."

Mr Tustin received final confirmation Mr Stewardson's story was false by speaking to his ex- wife in Australia, who clearly recalled where the moose photographs were taken.

Mr Tustin said he had spent hours speaking to Mr Stewardson by phone and had received letters from him supporting his story.

He now believes Mr Stewardson, who died nine months ago, never visited Wet Jacket Arm but was quite likely in Fiordland in 1952 when the head of a bull moose was brought out of the bush.

North American moose were released in Fiordland in 1910 and Mr Tustin has spent many years trying to establish that their descendants remain there.

Mr Stewardson claimed he kept the photographs a secret for 60 years to keep the Fiordland moose safe from other hunters.

"Fiordland will have loads of trigger-happy clowns there for slaughter.

Many won't give a damn if moose survive or not," he wrote to Mr Tustin last year.

Mr Tustin said he had early reservations about the photographs because of the shape of vegetation, but believed it did resemble vegetation he had seen in different parts of Fiordland.

After the photographs were published in the ODT he received an anonymous call warning him not to believe Mr Stewardson.

But despite offering Mr Stewardson the opportunity to retract his story, he never did.

"I'm disappointed he carried his story - knowing it was not true - to such great lengths ... knowing how important the accuracy of my [moose] history was to me."