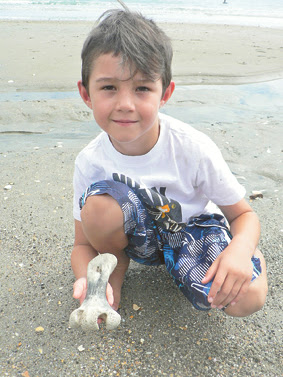 It's slightly old news now, but this story demonstrates how sometimes rare and unusual things will literally wash up at your feet!

The seven-year-old discovered what turned out to be the lower leg bone of a small moa among the huge number of horse mussels washed up on the beach.

Chris says that at first he thought it was a dog bone, then after showing it to his dad Scott, they decided it was something much more special.

“I used to work in a butcher’s shop and I’ve done a bit of hunting, so I’m familiar with animal bones,” says Scott, “and I’d never seen a bone with three toes like that before.”

Thinking it could belong to a moa, the family immediately raced back home and Googled ‘moas’ on the internet, where the images they saw confirmed their hopes.

“We saw a picture of a bone that looked exactly like ours,” says Scott. To be doubly sure, they emailed an image of the bone to the Auckland Museum and had the find authenticated by the curator of birds, Brian Gill.

“It’s a lower leg bone [tarsometatarsus] from one of the smaller moas [about a metre and a half tall] possibly the little bush moa or coastal moa. The edges are badly worn which fits in with it being tumbled in the surf,” says Mr Gill.

Mr Gill’s specialist field is naturally found bird bones in sites like swamps and caves as opposed to midden bones, which would have been hunted, eaten and discarded.

He says Auckland doesn’t have a lot of natural situations like caves and crevices where rare bones would be found, making this a very interesting discovery.

“I think we [at the museum] have about 15 from the Manukau Harbour and South Auckland area and about six from the North Shore. I can’t recall ever receiving moa bones from the Hauraki Gulf.”

He estimates that the bone would be at least 500 or 600 years old. “Assuming that Maori have been in New Zealand about 750 years, it is generally thought that moas disappeared quite quickly after their arrival due to hunting and habitat destruction.”

He says that certainly by the time of Captain James Cook and the subsequent sealers and whalers, there is no substantial evidence of moas existing in New Zealand, in spite of some rumours to the contrary over the years.

The Auckland Museum already has a large moa bone collection, curated by the late Sir Gilbert Archie, containing between 800 and 900 different groups of bones.

However it is always keen to obtain more and while at this stage the Andersons are keeping their rare find, Mr Gill says the museum would be keen to add it to their collection in the future.

There were eleven species of moa, the extinct flightless bird that was native to New Zealand. The two largest species reached about 3.7 metres in height with neck outstretched and weighed about 230kgs.
Moas were the dominant herbivores in the New Zealand forest, shrub land and sub-alpine ecosystems for thousands of years and until the arrival of Maori, were hunted only by the (also now extinct) Haast’s Eagle.
Posted by RR at 20:18