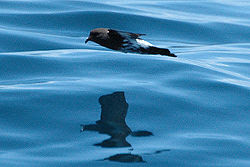 Great news indeed. Let's hope the NZ storm petrel flies its way out of extinction!
Posted by RR at 16:25